HAPPY HALLOWEEN Y’ALL!! (I had fully intended for this to be up by Halloween, oops…)

In September, I attended Mickey’s Not So Scary Halloween Party at Magic Kingdom for the very first time so I though I would share about how the night went!

When attending a Halloween party you of course have to dress up, and this was no exception! I REALLY wanted to go as Boo from Monsters, Inc. and after some convincing, Caitlyn and Devan agreed to go as Mike and Sully. I love any excuse to craft, so after multiple trips to Michaels/Walmart and sufficiently covering Devan’s living room in glitter, our costumes were complete! The costumes turned out super cute and I’m really glad we decided to do a group costume. We received tons of compliments on them (even though half of those people thought I was Randall) and Disney Style even asked to include our costumes in one of their articles which is super cool! 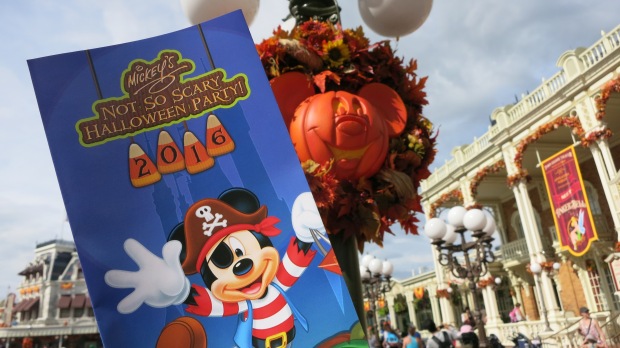 We arrived at Magic Kingdom around 4:30, got our party wristbands and treat bags, then immediately headed off to take pictures of our costumes while we still had the sun and before it started raining. 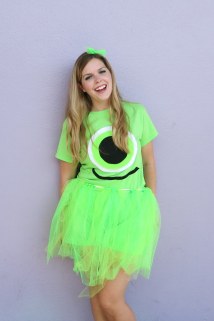 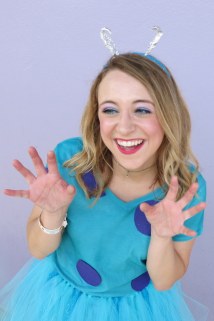 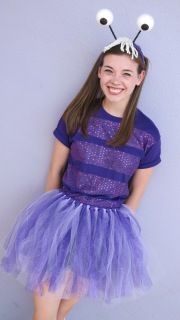 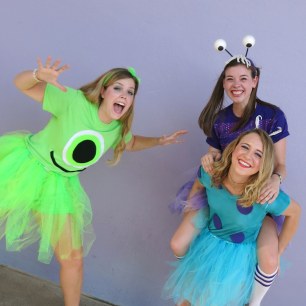 After our little “photo shoot” we caught the last show of the day of Mickey’s Royal Friendship Faire. MRFF is one of my favorite shows and I had yet to see the new autumn finale, so we HAD to go watch it. I loved the new ending (you can never go wrong with some banjo) and I’m excited to see the Christmas ending once the holidays roll around.

The rest of the night didn’t go quite as planned… In hindsight, we should have gone to a party earlier in the week because the weather on the night that we went seriously put a kink in things. We had a great time, but we lost at least 2 hours of party time due to the storms. The event is technically only from 7 pm-midnight and there is so much to do as is that losing that much time meant that we didn’t get to do as much as we could have 😦 On party nights, there are rare characters that meet plus dance parties, fireworks, the parade, a stage show, special snacks, and trick or treating, so time is of the essence! 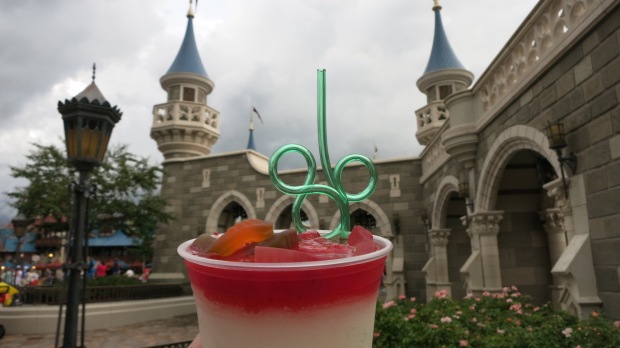 We hadn’t really planned on riding any rides, but since all of the character lines were closed due to weather we ended up doing several indoor attractions such as Space Mountain, Haunted Mansion, Country Bear Jamboree, and Mickey’s Philharmagic just to kill time. 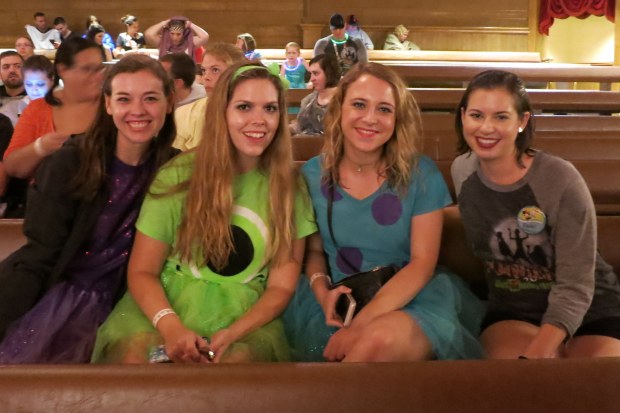 A couple of drowned rats watching our favorite bears

The first parade was unfortunately cancelled which was a huge bummer. We were hoping to watch the parade both times because we had heard it was THAT GOOD. Luckily though, it finally stopped raining and we were able to meet Cruella, do some trick or treating, and check out the dance party in Tomorrowland! 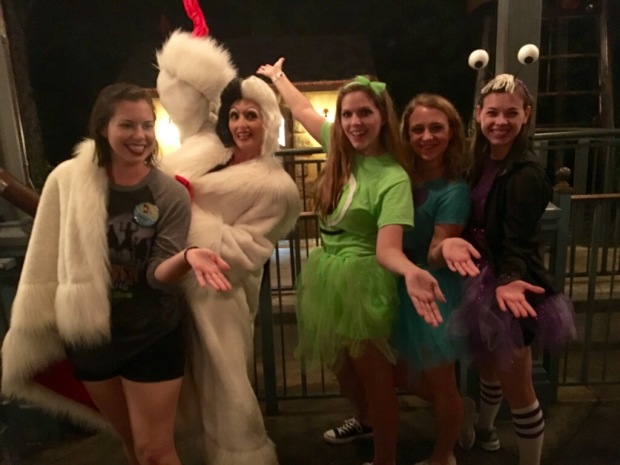 Finally, it was time for the fireworks show, HalloWishes! We got a really awesome spot just a few minutes before the show started which I think was due to so many people leaving the park because of the weather, so thank you to all those “quitters” 🙂

After the fireworks, we had a little bit of time to kill before the one and only parade of the evening, so we popped by Tomorrowland again for like the 4th time that night (where else would you expect to find a bunch of monsters). We got some more treats, met Lotso, and danced once again with our favorite monsters. Boo LOVED my costume 🙂 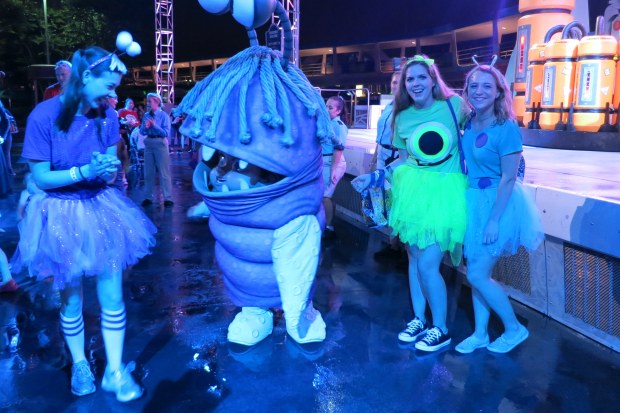 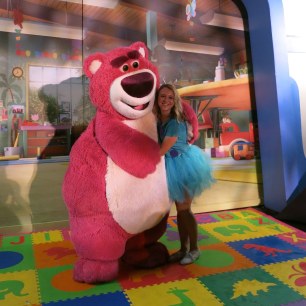 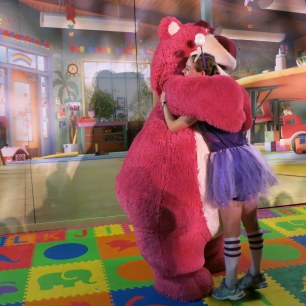 At last, it was time for Mickey’s Boo To You Halloween Parade!!!!!!!!!!! We were able to snag a really good parade spot right on Main Street only about 15 minutes before the parade started. I seriously loved this parade, and I wish I could have watched it both times!! It featured so many Disney Villians as well as some of Magic Kingdom’s “spookier” attractions such as Haunted Mansion and Pirates of the Caribbean. It was so great to see so many characters you typically can’t see in the parks on a normal day. 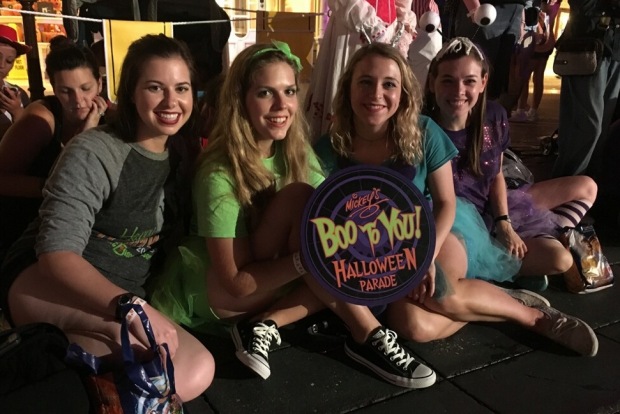 To end the night, we watched the Hocus Pocus Villian Spelltacular with just about every person left in the park haha. I totally wish I could have seen it more than once, or at least had a better view, but I really appreciated the live singing and the projections on Cinderella’s Castle really added a lot to the show! It was the perfect mix of silly (Sanderson Sisters) and spooky (Disney Villians).

I actually did a good job vlogging for once in my life, and I made a video of the night which you can check out below! I got lots of parade footage and I even caught Boo’s reaction to my costume on camera which was one of my favorite parts of the night! 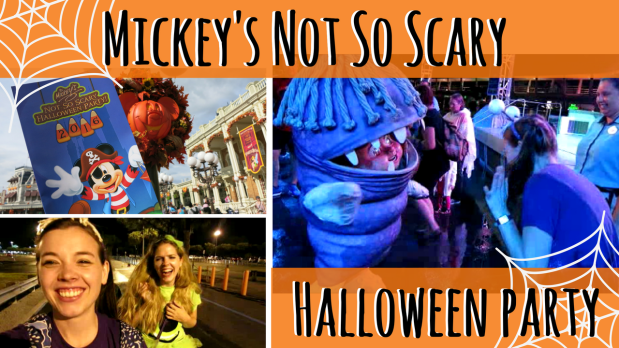 Overall, I really enjoyed the party and I would definitely suggest that anyone who can afford it go at least once! I would have liked to watch the parade and the Hocus Pocus show multiple times, and have had more time to meet some of the rare characters. I don’t think we even set foot in Adventureland the entire night, so I still have never met Jack Sparrow 😦 All more reason to come back in the future!